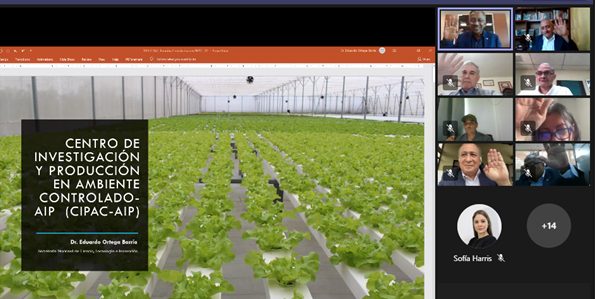 Panama, August 4, 2021. The National Secretariat of Science, Technology and Innovation (SENACYT) held a meeting with representatives of government institutions, private enterprise and academia, in which the Association of Public Interest Center for Research and Production of Agriculture in Controlled Environment (CIPAC AIP) was established last Friday, July 30, 2021.

The meeting was attended by Dr. Arnulfo Gutiérrez, director of the Institute of Agricultural Innovation of Panama (IDIAP); Mr. Eldis Barnes of the University of Panama; Mr. David Proenza Labrada of the Foundation for the Development of Agriculture in Controlled Environment (FUNDAAC); Mariel Edith Magrini from healthy growers and Felipe Ariel Rodríguez from the Fundación Centro de Competitividad de la Región Occidental de Panamá (CECOM-RO).

Other participants included Dr. Gerardo Escudero, representative of the Inter-American Institute for Cooperation on Agriculture (IICA) in Panama, and other representatives of IICA, the Ministry of Agricultural Development, the University of Panama and SENACYT.

By unanimous vote, CIPAC AIP and its bylaws were approved as well as the authorization to submit to the Ministry of the Government of Panama the application for legal personality, including the selection of the first Board of Directors as follows:

CIPAC AIP will be located in Tocumen and will establish the bases to promote research, training and production of agriculture in a controlled environment through the public-private partnership mechanism.

“This mechanism will facilitate governance and continuity in the medium and long term, without depending on a government administration. We aspire to move forward, in this non-profit center, carrying out actions to develop a sustainable, efficient and universal research, in accordance with the Strategic Plan of Government and the National Strategic Plan for Science, Technology and Innovation (PENCYT 2019-2024)” said Dr. Eduardo Ortega-Barría, national secretary of SENACYT.

Partnerships are expected to be made with national research, innovation and teaching centers in the country as well as in Latin America and the Caribbean.

Production of agriculture in a controlled environment allows to enhance and protect the agricultural production from external elements utilizing technologies to control soil, water, climate, nutrition and temperature, reducing the presence of pests, fungi, bacteria, nematodes, among others, and with a lower use of pesticides and other agrochemicals. This system helps to produce innocuous and better-quality products, with higher yields, using less space and contributing, in addition, to a reduction of greenhouse gases (GHG).
During the meeting, Dr. Escudero gave an overview of the evolution in Panama’s agriculture under controlled conditions in the last 20 years, from agroplasty, where plastics are used to protect crops from environmental factors, through greenhouses with technologies that include nets, fertigation, soil analysis, substrate use, water recycling, that is, saving technologies with less GHG emissions to vertical farming.

In his speech, Dr. Escudero highlighted the fact that Panama has depended on technologies from other countries and each sector has carried out un-coordinated actions, each one with its own learning curve. However, after hosting three international congresses on controlled environment agriculture in 2015, 2017 and 2019, with a better articulation between the public and private sectors, and adding the efforts of universities, in 2020, we concluded the exercise to elaborate a public-private policy proposal that promotes research and innovation in the sector of agriculture in controlled environment with an aim to create CIPAC AIP.
Also the updating of PENCYT had an influence in this development which included a policy to promote applied research to increase the competitiveness of agricultural production systems, and the enactment of the law for the Establishment of Companies to Operate and Develop Agroparks and Conglomerates.

“CIPAC AIP will be a center to develop national capacities, to mark Panama in the world, not as a recipient of technologies, but as a generator of technologies and products,” said Dr. Escudero.

For his part, Dr. Ortega-Barría indicated that, “The ecosystem of AIP’s in Panama helps us to catalyze the great ambition we have to progress in strategic areas where we have to strengthen governance, give them the financing and flexibility to help transform this country, strengthen competitiveness and productivity. Senacyt’s commitment, through the National Fund for Science, Technology and Innovation (FONACITI) is to help in this process so that we can progress with the CIPAC AIP project.”   In addition, he mentioned that SENACYT obtained an extraordinary government credit in 2021, and additional funding has been requested in the 2022 budget to support the development of this center.